SOCIAL BITE TO LAUNCH NEW EMPLOYMENT ACADEMY FOR THE HOMELESS 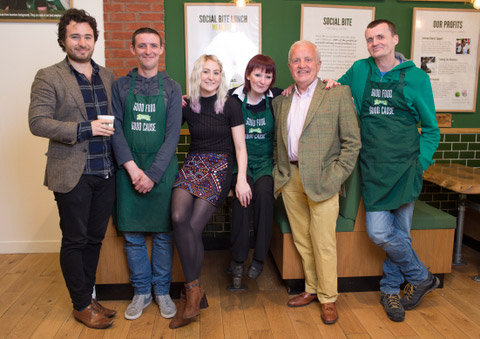 Social Bite, the social enterprise chain of sandwich shops, is to launch what is thought to be the world’s first skills and employment academy for the homeless community.

Each student will also gain paid employment in the Social Bite sandwich shop chain or with partner commercial businesses.

The Academy has been seed-funded by a £50,000 donation from The Watson Foundation, the new charitable trust launched by Glasgow entrepreneur John Watson who sold his eponymous printing business in 2013.

“At Social Bite we have spent the last four years employing people from backgrounds of homelessness. That has not been without its challenges and we’ve put everything we have learned into creating this academy program.

“The way it works is that our students will have their wage and a network of support entirely funded by Social Bite’s parent charity and supporting donors. Over the course of a four-year process, the student’s wage will transition from the charity onto the payroll of Social Bite’s trading business or that of any commercial companies we partner with.

“The amazing donation from The Watson Foundation will enable us to get the first three students into the academy and start the process.”

John Watson, former chairman and chief executive of John Watson and Company Ltd, said: “This is an inspirational idea and another important step forward in the battle against homelessness and poverty which must be won.

“I am convinced this initiative from Social Bite will be a huge success and we are delighted to be playing our part in changing lives for the better.”

Social Bite Academy students will be put through a programme of training, work experience, and counseling until they are in shape to be reinstated as fully-employed, productive members of society. During the course of the program, Social Bite will be partnering with charities throughout Scotland including Shelter, The Cyrenians, Turning Point and Crisis to provide a support network for the students.

The first student of the new academy will be Biffy Mackay, 27, who became homeless in 2010 when her relationship with her children’s father broke down.

From 2010 until recently, Biffy has been homeless, staying in a mixture of B&Bs and sleeping rough.  She recently started volunteering during the Social Bite’s after-hours service for the homeless and when she heard of the launch of the academy, she asked if she could be the first student. Biffy said:

“I can’t wait to get started on the program. It’s a bit daunting going back to work after living such a chaotic lifestyle for so long, but the idea of a structured program makes it a lot easier. I’m looking forward to having a reliable wage, building up my confidence and taking care of my baby daughter.”

Josh Littlejohn, co-founder of Social Bite said: “Giving people a structured course aimed at getting them into employment is the next logical step for us. It’s about using all the lessons that we have learned since founding Social Bite and creating a structured way to end the cycle of homelessness for those who find themselves in that desperate situation.

“We are excited for Biffy to have the first opportunity to join the academy and grateful to John Watson for making it happen.”