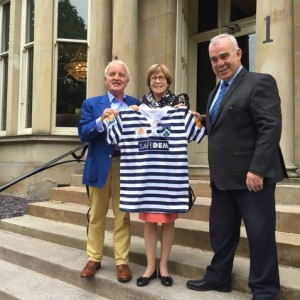 GLASGOW Academical Rugby Club is celebrating a sponsorship deal which will help promote one of the UK’s foremost charities which has a strong presence in Scotland.

The Club will feature the renowned Marie Curie daffodil on its shirts next season ensuring the organisation has an increased profile.

The deal came about thanks to a sizeable financial donation from The Watson Foundation, created by John Watson OBE who is a former pupil at The Glasgow Academy.

The Foundation also gave the same amount to Marie Curie which does marvellous work at its Springburn hospice.

Marie Curie exists for people living with terminal illness and their families. It offers expert care, guidance and support to help them get the most from the time they have left.

Dr Jane Collins, Chief Executive of Marie Curie who flew into Glasgow specially to make the announcement, said telling more people about the charity’s work through the rugby club was an “unmissable opportunity.”

Dr Collins thanked The Watson Foundation for its support especially as the shirts deal was matched with money for the charity adding: “This is a very exciting initiative and Marie Curie are honoured to be represented in this way.”

John M Watson said: “The Watson Foundation is delighted to be supporting Glasgow Accies and Marie Curie. We have a strong and enduring family connection to the Club and the work done by Marie Curie – particularly at its Glasgow hospice speaks for itself.

“The charity helps families every step of the way when dealing with a terminal illness and understandably receives the most amazing support from the public for its outstanding work.”

The money from The Watson Foundation will pay for the eye-catching shirts and will help meet the extensive costs of training and travel expenses.

Glasgow Accies can trace its history back to 1866 when an “Academical Club” was formed. Since then it has become a byword for success and keen sportsmanship and remains one of the best known rugby clubs in Scotland.

Following a successful 2015-16 season, Glasgow Accies have been promoted from the Regional West Division 1 to the National League 3.