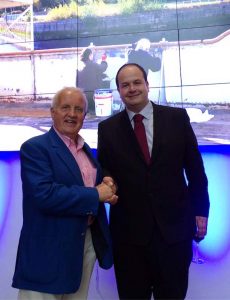 THE Watson Foundation has celebrated a further step forward in bringing the iconic Clyde steamer the TS Queen Mary back to life.

A special event for supporters was held at City of Glasgow College.

It was organised to mark the 85th anniversary of the maiden voyage of the iconic ship – the last Clyde-built turbine steamer – and the ongoing campaign to restore her to her former glory.

The Foundation has made a number of donations to the campaign – notably helping to renew and repair her prized decks made of teak.

A permanent berth was announced last year for the ship at the Glasgow Science Centre.

Built at Dumbarton in 1933 the TS Queen Mary was successfully brought back to the Clyde from Tilbury Docks in Essex.

As a museum, she will connect local people with the River Clyde and its great industrial heritage. TS Queen Mary will offer a range of exciting curriculum-linked learning experiences to all schools in Strathclyde.

Iain Sim, Trustee and Secretary of Friends of TS Queen Mary thanked the Foundation for its generous donations over recent years.

City of Glasgow College sits on the site of the former Glasgow Nautical College and was an appropriate venue for the anniversary celebration given its maritime learning opportunities delivered from its Faculty of Nautical Studies.

The occasion was also attended by the Lord Provost of the City of Glasgow Councillor Eva Bolander. A major highlight of the event was a musical performance from the legendary Barbara Dickson OBE who is a leading supporter of the Friends of TS Queen Mary.