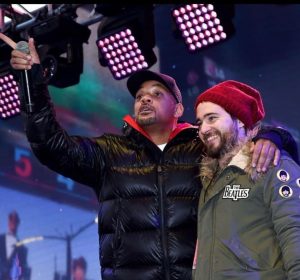 The Watson Foundation has again played its part in supporting Social Bite through this year’s “World’s Biggest Sleep Out” which took place on December 9.

John Watson OBE was on stage at Edinburgh’s Princes Street Gardens continuing the Foundation’s long association with the initiative.

The World’s Big Sleep Out was established by Social Bite’s Co-Founder Josh Littlejohn MBE to bring the Sleep in the Park concept worldwide. 300 people took part in the 2016 Chief Executives’ sleepout, 8000 in the 2017 Sleep in the Park, growing to 10,000 in 2018.

What was born in Scotland has now being taken to the global stage. Hollywood A-listers were among around 60,000 people who took part including Dame Helen Mirren and Will Smith.

Josh said: “What the incredible 60,000 people who slept out all over the world have done tonight is to shine the spotlight on this global issue and show that we care. I am truly blown away by the response to our campaign and sincerely grateful to every single person who has given up their beds to raise the funds and awareness needed to make an impact.”

And in a personal thank you to John Watson OBE who has financially supported Sleep in the Park through the Foundation, Josh said: “THANK YOU so much from the bottom of my heart. It really couldn’t have happened without you and I will always be incredibly grateful to you.”