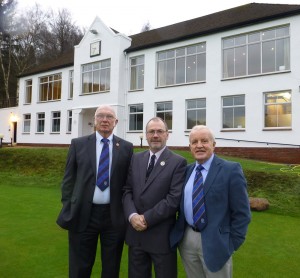 John Telfer has been in charge of Junior Development at Douglas Park for the past 18 years and in that time he has acted as Junior Convener and Team Manager.

He has provided great commitment and encouragement to the younger members by arranging inter-club golf matches, team selection and helping the younger members to progress. For the past 14 years he has also been Match Secretary of the local Under 15 league.

This has given Douglas Park an enviable reputation as a leading Club when it comes to junior golf development.

John Watson OBE has been a member for over 55 years and like John Telfer has shown great devotion to the Club. His family have been strong supporters of Douglas Park over many decades with his late Father and Mother being Honorary Members, too.

Honorary Memberships are only offered on rare occasions. At Douglas Park just 27 have been awarded in the last 119 years.

In the past John has made a number of donations to the Club including the Centenary Gazebo in 1997 to mark Douglas Park’s first 100 years, an electric caddy car shed and most recently the new “Practice Facility”

He also gifted significant funds in late 2014 for substantial infrastructure improvements to the iconic and much-admired Clubhouse and surrounding parkland and pathways.

Douglas Park said this week it was delighted to announce the Honorary Memberships to two members who had “contributed substantially to the success of the Club and its members both young and old.” The names of both men now join the Roll of Honorary Members Board in the Clubhouse.

A spokesman added: “This is the highest honour the Club can bestow on any of its members. In presenting John Telfer and John Watson with Honorary Membership we are recognising their deep commitment to the Club.”