KYLIE SWINGS BY FOR GOLF MASTERCLASS AT DOUGLAS PARK 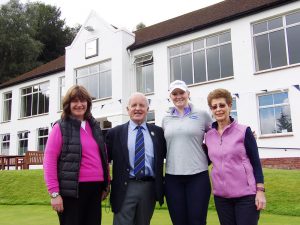 Kylie paid a visit to the popular Bearsden club to provide a “Masterclass and Clinic” prompting a large turnout from members keen to learn from the best.

It was so popular that three one-hour sessions had to be organised during Kylie’s visit which concluded with a much-valued question and answer session held on the first tee.

The event was organised by The Watson Foundation set up by John M Watson OBE – an Honorary Life Member of Douglas Park and whose family have strong connections to the Club.

The Watson Foundation sponsors Kylie who is a Ladies’ Professional Golf Association touring professional and her Douglas Park visit was described by the Club as a “prestigious exhibition fixture.”

John M Watson said: “We were delighted to welcome Kylie to Douglas Park. It was a great occasion which attracted a large turnout from members. Originally designed for lady members it was widened to include all sections including given Kylie’s popularity especially among Junior members . Her masterclass, as expected, provided great tips from a true golfing professional.”

Kylie is well known as an exceptional golfer having turned professional aft a successful amateur career in 2010 and now plays all over the world.

She is a great sporting all rounder and lists swimming and running among her other sporting choices.

The Watson Foundation has helped Douglas Park before – in 2014 the Club received one of its biggest ever donations in the form of a £100,000 gift.

The money was used to improve many aspects of the Club’s infrastructure. Improvements included the external refurbishment of the impressive Art Deco Clubhouse which was built in 1938 and enhanced roads and paths.

John also has strong family connections to Douglas Park with several members of his family having been members over the years. John has played at the Club for almost 58 years.

During this year Douglas Park has made a concerted effort to recruit more new members with significant success. Application forms for members can be obtained from the Club.