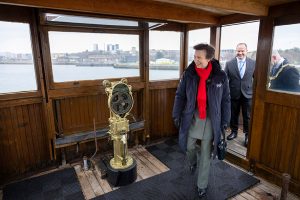 HRH The Princess Royal has announced the iconic and much-loved steamer TS Queen Mary will sail on the Clyde once again.

Now The Watson Foundation – a long-standing financial supporter of the steamer‘s restoration – has welcomed the sensational development.

The Princess Royal made the announcement on a visit to Pacific Quay in Glasgow in March where the ship is undergoing careful restoration.

Her visit came three years to the day since The Princess Royal became Royal Patron of the ship and it is hoped TS Queen Mary will be back in service offering Clyde cruises by the summer of 2024.

The announcement reflects a change of plan by the charity Friends of TS Queen Mary – tasked with its restoration – which says it has been “overwhelmed by the generosity of corporate donors and individuals” keen to see the ship restored to its former glory.

Originally, it was planned that TS Queen Mary would be permanently berthed at Pacific Quay next to Glasgow Science Centre and have a heritage and maritime training focus while connecting Glasgow and its citizens to a ship which sailed from Bridge Wharf opposite the Broomielaw and was known affectionately as “the Glasgow boat”.

Now it has been decided it will sail again on the Clyde, supporting the post-pandemic recovery and providing a boost to Scotland’s tourism generally and notably Clyde coast resorts such as Rothesay and Dunoon which were familiar destinations.

Built at Dumbarton in 1933, TS Queen Mary was successfully towed back to the Clyde from London in a marathon voyage along the coast of the United Kingdom in 2015.

In her heyday, TS Queen Mary carried 13,000 passengers each week and was known as “Britain’s Finest Pleasure Steamer”.

No other Clyde steamer carried anywhere near the number of Royalty that it did including King George V, Queen Elizabeth the Queen Mother, and the then Princesses Elizabeth and Margaret and Lord Mountbatten of Burma.

Its last time cruising was in September 1977 and TS Queen Mary completed her last sailing with her reputation as the largest, most luxurious and prestigious steamer on the Clyde intact.

Since restoration work began, Friends of TS Queen Mary have raised and invested £3.8 million of cash and in-kind support in the project.

Iain Sim, Chairman of the Friends of Queen Mary said the announcement that TS Queen Mary will resume luxurious Clyde cruising once again after 47 years was a “landmark day” in the proud history of a beloved ship.

Iain said: “It is entirely fitting that this announcement should be made by HRH The Princess Royal given the strong family connection TS Queen Mary has – not just to her great grandmother Queen Mary after whom the ship is named – but to the wider Royal Family.

“When Her Royal Highness became Royal Patron of the ship three years ago to the day it re-established that important Royal link.

“TS Queen Mary also has a special place in the hearts and minds of those in Britain and beyond who recall this iconic ship and its unrivalled place in the life of the River Clyde.

“Thanks to the backing of our wonderful supporters – both individual and corporate and those whose hard work is defining this restoration – TS Queen Mary will set sail once again.

John Watson said: “This is an incredible development which is great news for those who have longed to see the TS Queen Mary sail again. As a committed supporter of the ship we applaud the efforts of the Friends of TS Queen Mary to realise the dream of her sailing again.”