Wheelchair users will soon be able to play golf using specially-designed innovative buggies which raise them upright so that they can swing at the ball.

Inspired by the Paralympics and disabled golfers during the Ryder Cup, the Glasgow-based Social Care Ideas Factory (SCIF) has helped create the only two publicly accessible Paragolfers, in partnership with Mearns Castle Golf Academy in Newton Mearns, East Renfrewshire and The Watson Foundation. 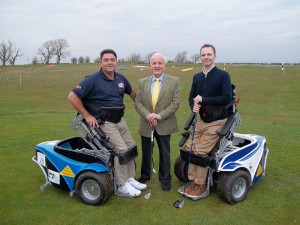 The Foundation has provided generous financial support to purchase the Paragolfers and was set up by John Watson OBE, former Chairman and Chief Executive of the renowned printers John Watson and Company.

Paragolf Scotland was launched on Thursday, April 14, at Mearns Castle Golf Club in East Renfrewshire attended by Anthony Netto, a US veteran and wheelchair user since 1990 who founded the Stand Up and Play Foundation in America.

John Watson said: “We are delighted to be supporting this fantastic initiative. Sport should be accessible to all and we applaud Mearns Castle golf club for being at the forefront of opening up golf to everyone irrespective of whether they have a disability or not. Other clubs should take their lead from this inspiring development.”

Charlie B-Gavigan, chief executive of SCIF, said: “The idea for the Paragolfers arose out of conversations we had with disabled US golfers who had come over for the Ryder Cup in 2014 and were looking for Scottish golfing partners to play with. We thought it was a shame that, as the home of golf, we didn’t have anywhere that wheelchair users could enjoy a round. Now Mearns Castle has two units and there is a third Paragolfer in the Lothians.”

SCIF has been operating since 2006 with the aim of creating a social innovation network to support health and social care ideas. It is funded by the Scottish government and local authorities and also runs its own fund-raising activities.