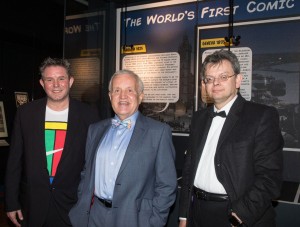 Professor Laurence Grove, (left) lead academic for the Comic Invention exhibition with John
and Professor Anton Muscatelli, Principal of the University of Glasgow

The Watson Foundation is pleased to be supporting the magnificent Comic Invention exhibition which runs until mid-July at the Hunterian Art Gallery in Glasgow.

Featuring works by Lichtenstein, Warhol, Picasso and Rembrandt, the show looks at how we tell stories with pictures, exploring the cultural and historical background of graphic narrative.

Comic Invention also combines comics with art, manuscripts and objects, taking us from the world’s oldest comic (produced by the original John Watson) to Scooby Doo and Batman and showcasing treasures from The Hunterian and beyond, from the ancient Egyptians to Hogarth and contemporary items.

John Watson OBE, through The Watson Foundation, has provided generous financial support to the Comic Invention exhibition and has donated a facsimile copy of the remarkable “Glasgow Looking Glass” dating from 1825 to the University of Glasgow. 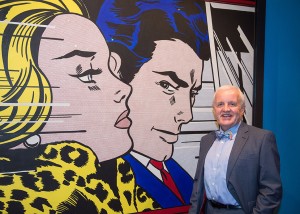 John with one of the exhibits

John said: “We are able to trace our history as a business as far back as the early 19th century and are thrilled not just to have given a copy of this incredible publication to the University but to be supporting the exhibition financially. I am in no doubt Comic Invention will capture the public’s imagination and be a truly fascinating insight into the world of comics.”

Comic Invention also establishes the Glasgow Looking Glass – which poked fun at the city’s 19th century great and good and a very important but little known work – as the world’s oldest comic, confirming Scotland’s place as the birthplace of comics.

John with “The Glasgow Looking Glass”

The University of Glasgow’s Professor Laurence Grove, lead academic for the Comic Invention exhibition and an expert in the history of comics, said: “This is a unique exhibition. For the first time comics are being put on an equal footing alongside artworks by the likes of Rembrandt and Warhol, and that is where they belong. They are works of art in their own right.”

Comic Invention is at the Hunterian Art Gallery from 18 March until 17 July 2016. Admission is £5.00, £3.00 concession. Free admission to under 18s, Hunterian Friends and University of Glasgow staff and students.