BACK IN THE FRAME!

John and Gerard with the family painting from 20 years ago and John in the new portrait. 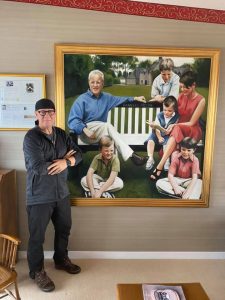 Twenty years ago Gerard depicted John’s growing family in the garden of their former home, Bankell House – a baronial mansion in East Dunbartonshire.

Now two decades on later he has returned to paint John once more – this time in retirement as he reflects on 50 years of a working life in printing.

The painting in oil shows John in front of whisky and spirit brands – many of whose labels are intricate in their design. These labels, which defined the success of John Watson and Company Ltd, helped the eponymous business to become a world beater in label printing.

Both paintings now hang in John’s current home near Glasgow.

John explained: “This was undoubtedly a happy reunion 20 years after my family – at the time growing up fast – were painted by Gerard.

“Gerard’s exceptional artistic skills are breathtaking. He is easily the foremost Scottish portrait artist of the present day – and by some considerable margin.

“I am delighted with the new portrait which in many respects shows me in a reflective mood contemplating my many years in business.”

Gerard is a graduate of Glasgow School of Art and painting has been his “abiding passion” since childhood when he picked up his first sketchbook.

Working in what could be described as a photo-realistic style Gerard’s portraits employ incredible technique to render his subjects in remarkable detail. They often include objects and symbols relevant to the sitter as the paintings seek to convey far more than simply a ‘likeness’ in the finished work.

Gerard’s prowess as a portrait painter has led to him painting two First Ministers and many other iconic Scots.

The management and pre-press personnel at Bell & Bain were of inestimable value in producing this lavish and compelling record of Gerard’s work.

More examples of Gerard’s art can be seen at www.gerardmburns.com